Nothing can beguile your taste buds like a pot of flavourful chicken biryani can do. Tracing its roots back to Persia, it has been satiating the hunger of millions of Indians for centuries. This magnificent dish is omnipresent in India and different regions have modified it to suit their local taste pallet.

If you are looking for an outlet that serves the most authentic chicken biryani near me- then look no further than Ekdum!! The elaborate chicken biryani menu includes all varieties from modest chicken dum biryani, exquisite Dindigul chicken biryani to the royal Lucknowi Nawabi biryani, just to name a few. You can download the user-friendly Ekdum!! App to order biryani online and experience a riot of flavours from the comfort of your home. 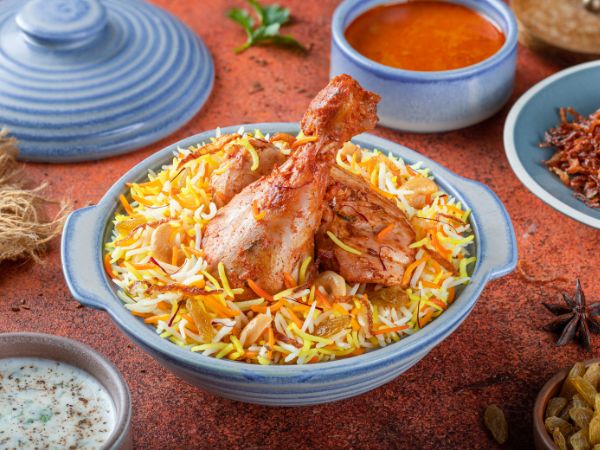 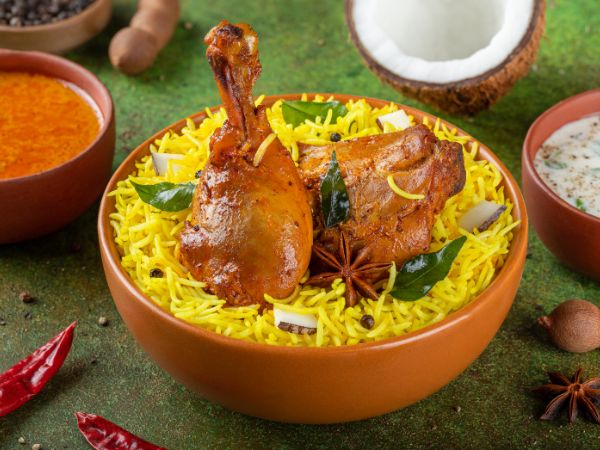 Ekdum!! Chicken Biryani That Is Cooked to Perfection

Perfectly cooked chicken biryani is an art that not many can master. It requires precision, patience and lots of love. It a wholesome dish that witnesses the seamless amalgamation of perfectly textured long grain rice with tender meat and choice of vegetables. These main ingredients are cooked in a mixture of finely balanced and authentic proportions of whole spices like cumin, clove, cardamom, cinnamon, star anise, bay leaves, shahi jeera and more.

The cooking technique for veg biryani or chicken dum biryani is deep-rooted in the traditional Persian method of slow cooking referred to as Dum Pukht. This method involves delicately frying the whole spices in pure clarified butter before the marinated chicken and parboiled basmati rice is added. Ekdum!! follows the custom as is by using earthen pots and sealing the whole preparation with wheat dough so that the rice and chicken are infused with the right amount of flavour of the whole spices. It may sound like a daunting task to watch the process of making chicken biryani online, and trying it at home, that’s why it is easier for you to order chicken biryani online from chicken biryani restaurant near me. The chicken biryani menu at Ekdum! will pleasantly surprise you with its exhaustive variants of biryani and the chicken biryani price empowers you to eat to your heart's content without having to worry about spending more.

So next time when you get on a hunt for a Biryani Restaurant that serves flavoursome chicken Biryani near me, don’t forget to try out our signature Nizami chicken biryani that is sure to make you come back for more. Conveniently place your chicken biryani order by going online or calling them directly and the piping hot chicken biryani home delivery will be done in a matter of minutes.

Chicken dum biryani, a culinary classic which is synonymous with the Indian heritage, has different variations in different parts of India. This concoction of rice and meat is flavoured with regional spices to satisfy the tastebuds of the native people. Let’s take a look at some of the popular variants of chicken biryani which will make you drool.

Hyderabad is a city that’s famous for its pearls, palaces and of course for the Hyderabadi chicken biryani. Historians believe that Hyderabadi biryani originated in the kitchens of the Nizam who ruled the state in the 18th century. Hyderabadi chicken dum biryani served at Ekdum! is prepared most authentically in a round, heavy-bottomed handi. The high-quality meat and basmati rice along with aromatic spices is simmered on a low flame, allowing the ingredients to cook in their own juices, sealing the natural aroma. Garnished with fried onions, coriander and mint, every spoon of this Biryani scream royalty.

Your search for Hyderabadi chicken dum biryani near me will lead you to Ekdum! and Hyderabadi biryani online order can be placed with just a few clicks.

If you are a someone who likes the luxurious flavours of Awadh, then Lucknowi Biryani is what you will cherish the most. Prepared with characteristic yoghurt marinated chicken pieces, premium quality basmati rice and alluring freshly grounded Lucknowi spices, and dry fruits- the Lucknowi Chicken biryani feels smooth and rich in every bite. The kewra essence and the saffron adds an aroma that can't be resisted.

Can’t wait to experience this delicacy? Then order chicken biryani online from Ekdum!. The chicken biryani delivery is done in an innovative “Dum Seal packaging” that securely locks the aroma and flavours to give you the best biryani experience.

Originated from the ‘City of Joy’, Kolkata chicken biryani is a stroke of a brilliant combination of potatoes, moist chicken and long grain rice stewed together with unique wholesome spices giving it a distinct sweet touch. And you know what makes Kolkata chicken dum biryani even more delightful? The dim (boiled egg) hiding in the perfectly cooked fluffy, colourful rice! Kolkata style chicken biryani served at Ekdum! is prepared with the highest quality ingredients guaranteeing you perfect taste. Get online and order your favourite Kolkata biryani right away!

If you like to experiment with food, then a must-try is the Dindigul biryani which beautifully captures the Southern flavours of Tamil Nadu, tingling the taste buds of the biryani lover in you. The characteristic sour, tangy flavour of Dindigul chicken biryani is what makes it stand out from the rest.

Chicken Boneless Biryani That Melts in Your Mouth

Mutton Biryani is one another delicacy that is equally adored by people from all parts of India. Ekdum! serves this beauty along with jeera raita and succulent salan to further enhance the taste.

On days when you want to indulge in some delectable chicken biryani, don’t settle for anything less than the best chicken biryani from Ekdum!. You can savour from 20 different types of biryanis starting at just INR 99 to satisfy your craving for this one-pot dish.

For your eggilious love, Ekdum! brings to you the signature egg biryani which effortlessly fusses the aromatic biryani rice with eggs. The eggs are boiled, marinated in herbs, deep-fried and then cooked in dum with other spices and rice in an earthen pot. If you are a biryani fanatic, then don’t miss out on the special butter chicken biryani crafted by Ekdum!. It has a creamy texture that creates an explosion of royal, rich flavours in your mouth.