Dindigul biryani is a popular type of biryani that originated in the Dindigul region of Tamil Nadu. The delicate balance of delicious spices and the specific type of rice used to make Dindigul chicken biryani give it an aroma that will overpower your senses and make your mouth water instantly. Discover the magic of this explosively yummy Dindigul biryani near me with Ekdum! biryani.

The humble beginnings of the famous Dindigul mutton biryani are a testament to the powerful impact of its amazing taste. People would go out of their way and travel a long distance just to have the Dindigul veg biryani. The lore of this unique blend of spices, meat and rice reached far and wide and people came from all over Tamil Nadu to have this treat. Thankfully, you needn’t worry about travelling and you can just order biryani online from Ekdum! biryani to enjoy this amazing food. 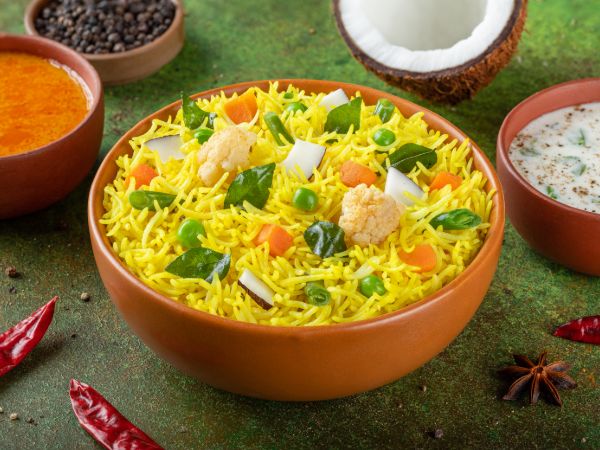 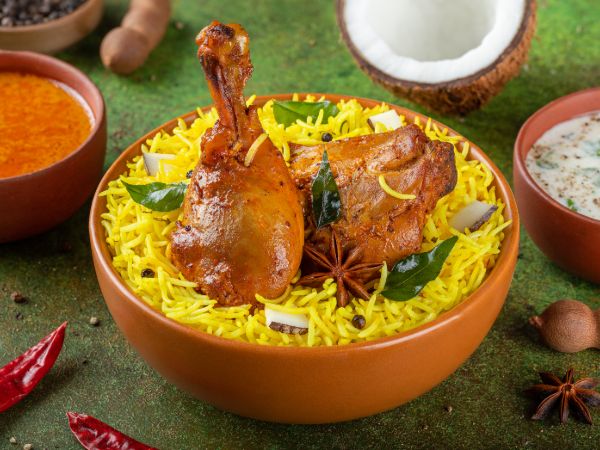 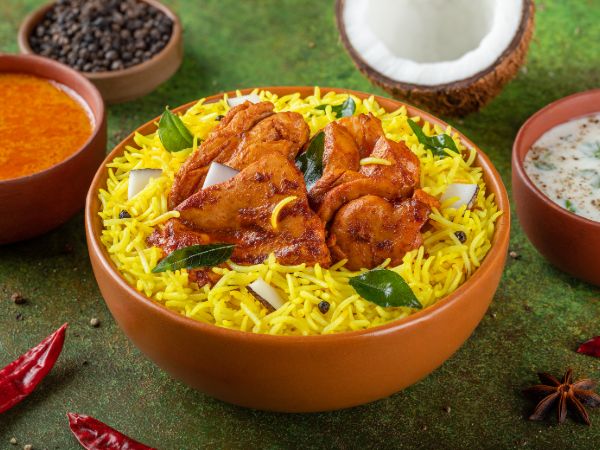 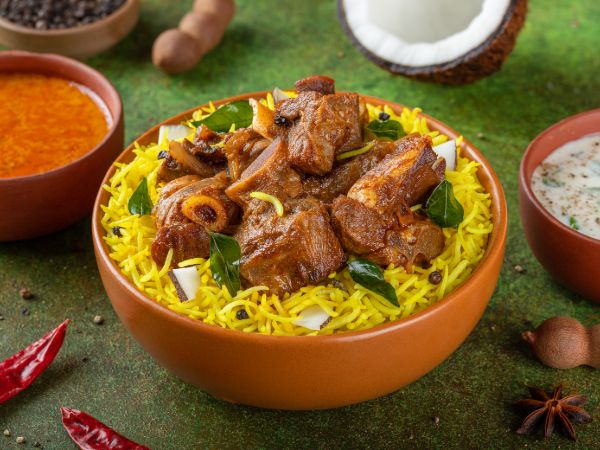 The beginning, the appeal and the fame of Dindigul Biryani

Dindigul biryani was first made by a person who owned a humble establishment. He had an idea to share his wife’s culinary brilliance with the world. The lip-smacking Dindigul chicken biryani gained popularity and it became famous as a different category of biryani altogether. Some say, one of the factors that made Dindigul veg biryani so great, was the water they used to make biryani. One thing that helped make this biryani unique was the use of Sreeraga Chamba rice. Probably the only biryani to promote anything other than Basmati rice, this Dindigul dum biryani near me is a favourite of the common man. Alleviating the pressures and stress of daily life, this is a treat for celebrating small victories or motivation during those hard days.

Foodies know that the perfect Dindigul mutton biryani is not about emphasizing one aspect but a feast for all five senses. The perfect accompaniments with this biryani are the famous salan and raita. When you wish to order Dindigul biryani, the best place to order it from is Ekdum! because raita and salan will come along with your order of biryani. When you are craving this southern jewel, you can order biryani online in Gurgaon from Ekdum! biryani.

The comfort of getting Dindigul biryani online is because of the journey that Ekdum! has set out on, with one goal in mind. The simplicity and the richness in every morsel of Dindigul nizami biryani are like being a part of history. The best place to get Dindigul biryani near me is Ekdum! whose experts have discovered secrets which are several generations old, to bring this better-than-ever taste to your table. Whenever you wish to visit a Dindigul biryani restaurant, just think of Ekdum! biryani.

Good thing Ekdum! has you covered or what would it truly cost to have authentic Dindigul biryani? The Dindigul biryani price would have been much lesser than what is required to get to Dindigul! With the option to devour Dindigul biryani online order, you can gorge on this delicious biryani and head straight for your nap! Because what else can you do after having such a wholesome and heart-warming meal?

The effect of Dindigul biryani on your palate is astounding. This desirable concoction is made a little differently from the rest of the biryanis. Although, the concept of dum or using steam for cooking is the same, instead of Dindigul dum biryani it is often commonly called Dindigul biryani.

Dindigul chicken biryani is said to be the most delicious of them all. The meat is marinated and added to the pan with sauteed spices. Once the meat is cooked, the rice is added and mixed completely. The lid is then closed and sealed with dough. However, there are no layers that are done in this type of chicken biryani. Order Dindigul chicken biryani from Ekdum! to experience this hearty biryani. The better way to enjoy this is by ordering Dindigul chicken biryani online and digging into it, preferably sans cutlery, while enjoying a lovely time at home with your loved ones. What can stop good memories from being great with a table full of food and a heart full of love?

Dindigul veg biryani comes with the promised accompaniments and of course, there are other accompaniments you can order to appease your taste buds. Veg biryani is an instant hit because of the combination of peppers, chillies, curry leaves and black stone flower. One of the best options amongst veg Dindigul biryani near me is the biryani at Ekdum!

Ekdum! Biryani restaurants have made the process of ordering and enjoying biryani much easier. The website is customer friendly and provides brief descriptions of the dishes as well. The exciting range of curries and bread to go along with the Dindigul biryani are truly magnificent. When you order Dindigul biryani, don’t forget to club a beverage from the long list of inviting beverages. The Kala Jamun and Dilli Aam Panna will revitalize you. Before you have the Dindigul dum biryani, you can also savour the lovely kebabs and starters. Whether you are a tikka, seekh or a kofta fan, Ekdum! has got it all for you. Make your meal a smashing success by ordering indulgent desserts when you order Dindigul biryani online. A mousse fan and a Gulab Jamun fan will both be delighted after looking at that dynamic menu. Ekdum! also has an option for Dindigul biryani delivery.

Ekdum! is dedicated to giving you an experience of authentic flavours. The unwavering standards of quality and the uncompromising attitude are what makes Ekdum! so great. Why settle for less when you can have the best?