Nothing spells royalty like a sealed pot of Hyderabadi mutton biryani, waiting to unfurl its aroma and take over your senses. Made carefully by combining the choicest of ingredients, this biryani is a reflection of the history of this region. The onslaught of undiluted flavour is what every morsel of Hyderabadi chicken biryani is all about.

Ordering Hyderabadi biryani near me has been made easier by Ekdum! Once recognized as the epitome of culinary expertise, Hyderabadi biryani can easily be named as the best amongst all the biryanis. The dedication to create magic and serve perfection is what drives Ekdum!. There are also unmatched flavours and options for vegetarians like Hyderabadi veg biryani that makes Ekdum! so unique. Indulge into biryani made with techniques passed on from one generation to the next and mastered by experts at Ekdum! The option to order biryani online make the whole experience even more luxurious. 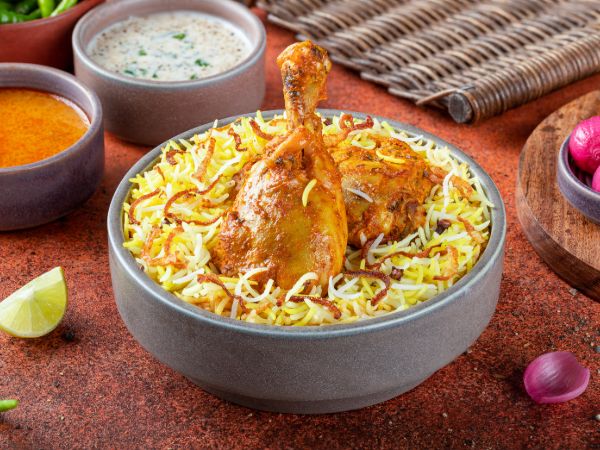 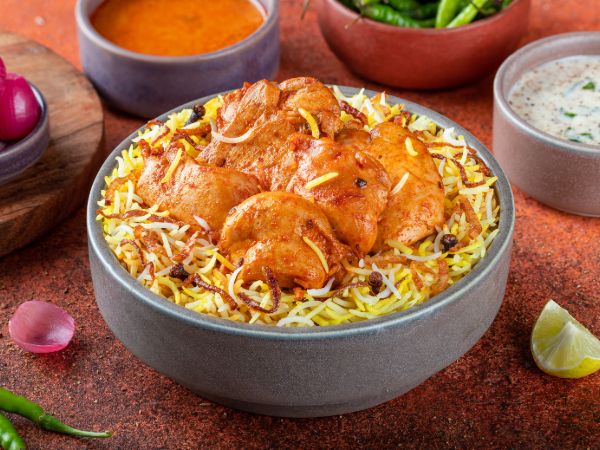 The exceptional opulence of Hyderabadi biryani

Hyderabadi biryani has gained its well-known characteristics because of the particular ingredients as well as the methods of cooking used. A few key ingredients that go into making Hyderabadi Nizami biryani are, basmati rice, spices, curd, onion, ghee and of course saffron. The addition of tender, half-cooked mutton while making Hyderabadi mutton biryani, adds an extra oomph to the aroma. The juicy succulent meats maintain their flavour and integrity due to the method of cooking used called dum pukht. The application of this age-old method to make Hyderabadi dum biryani near me at Ekdum! is a testament to the authenticity.

Thinking about biryani on days your mum asked you not to have non-vegetarian food? Well, thank goodness for the option of Hyderabadi veg biryani at Ekdum! Strict guidelines are laid down and followed to ensure that the vegetarian and non-vegetarian food is cooked separately. You can simply order biryani online in Gurgaon on those days too. After all, the richness of flavour is what makes the biryani at Ekdum! a treat.

Daydreaming about having the delectable biryani from Ekdum! again? Don’t let your budget stop you. Enjoy various combos and deals of biryani along with starters and cold beverages. You don’t have to worry about the Hyderabadi biryani price when it starts from 99 rupees at Ekdum! When you are looking for Hyderabadi biryani near me, you can never go wrong with Ekdum!

Ekdum! has recognized the crux of a good Hyderabadi biryani and has curated the recipes using research. The goodness of a well-made Hyderabadi dum biryani and the consistency is maintained due to the procedure-driven chefs at Ekdum! The motto to deliver nothing but the best reflects in the food served.

Ekdum! has an inclusive menu with numerous options for those with a penchant for Hyderabadi veg biryani. The quintessential biryani with the goodness of vegetarian elements is waiting for you. The next time you crave different kinds of veg biryani , head straight to Ekdum! for a lip-smacking meal. Getting Hyderabadi veg biryani near me has never been easier.

The next time you are craving Hyderabadi biryani or biryani of any kind, you know where to go. The delicious curries like Dum Dal Makhani or Amritsari Pindi Chole go perfectly with one of the lovely Indian bread or you can pair them with Hyderabadi dum biryani as well. The Chatpatta Aloo, Masala Chicken Kofta, Nizami Chicken Seekh, and Andhra Pepper Chicken are just some of the power-packed items to get your meal started. When you order Hyderabadi biryani, don’t forget to look at the accompaniments as well. Categorically mentioned as Salans, Raitas and Chutneys, these dishes will accentuate the ultimate biryani experience. Whenever you wish to order Hyderabadi Nizami biryani, take a look at the beverages that make your meal memorable. The Kala Jamun and Chowpati Kala Katha might make space in your tummy for more! The ease with which you can order from Ekdum! biryani restaurants, make it a favourite. Don’t forget to club desserts when you are ordering Hyderabadi biryani online.

Ekdum! will not only ensure safe Hyderabadi biryani delivery but also the delivery of a promise made to you. Order today for the Ekdum! experience.