Had an exhausting day at work? Stressed much? How about ordering-in some hot pot of freshly prepared veg biryani? There is no heart that doesn’t skip a beat at the thought of rich, aromatic vegetable biryani. Thick long grains of rice, crunchy vegetables; when cooked slowly with love and just-the-right spices, makes for a drool-worthy veg dum biryani.

Thinking how spicy, rich biryani can make you go weak in the knees, EkDum! brings forward the most exciting and satiating palette of veg biryani menu. What are you waiting for? Call over your friends, reach out to the nearest outlet, check out the biryani menu, and order biryani online. You surely will win them over with their matchless taste, dedicated customer service, and prompt delivery as always. 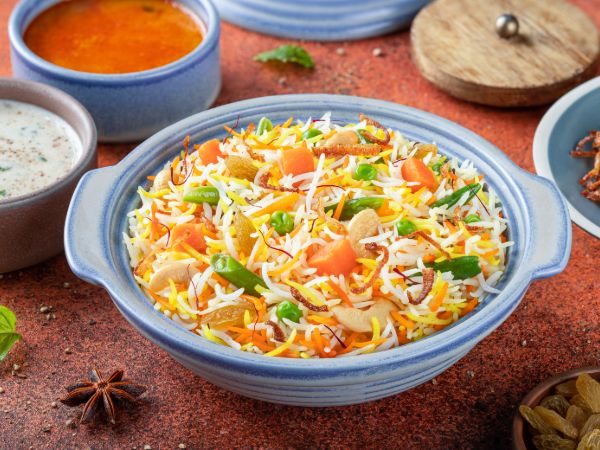 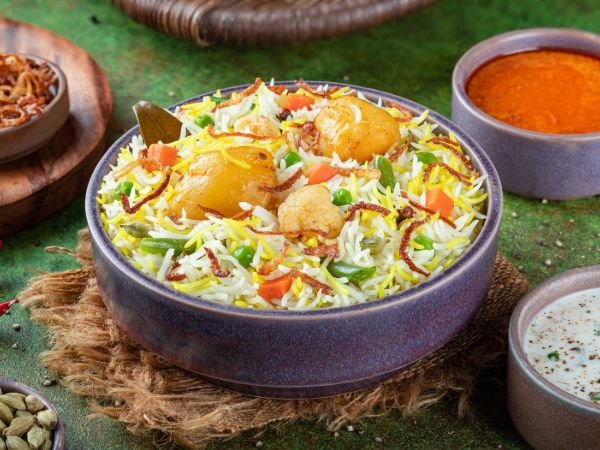 India is the land of spices and flavors. Of all the things that India has offered to the global cuisine on the world map, Indian veg biryani is unbeatable. Whenever a dinner or lunch table is laid, all eyes are hooked on the only dish and that is undoubtedly a pot of piping hot, aromatic biryani. No matter if it a vegetable biryani or a handi chicken biryani, the craziness and elation for both is unmatched and over-the-top. Indeed rice is the most regarded comfort food all around, but when this simple rice is combined with crunchy veggies, wholesome meat, fragrant kewra water, and other condiments into a sabji biryani; it raises the bar much higher. Years ago veg dum biryani was founded in the lands of Lucknow and Hyderabad when the locals admired this dish as a bonne bouche. But soon after the word of its supreme taste spread across just like its enigmatically attractive aroma. Today numerous joints are serving delectable and super-tasty veg biryani near me. But the latest head-turner in the realm of biryanis’ is none other than EkDum!. Be it in-store dining-in or ordering online here is the widest range of delicious and original veg biryani menu. It is slowly emerging as the most preferred veg biryani restaurant near me owing to its premium quality of ingredients, hygiene, and fresh preparation. Whenever you are craving some appetizing and scrumptious vegetable dum biryani, jump over to Ekdum! To order veg biryani online. The premium taste is beautifully canvassed in its signature veg biryani and will certainly blow your mind over. On any day you decide to treat yourself and your loved ones to some amazing food, opt-in for veg biryani online order near me from Domino’s Biryani Restaurant in the neighborhood.

Veg Biryani is not just food, It is a bowl of emotions served hot to melt your heart and spread love. There is immense frenzy among foodies when looking for veg biryani options around. Here are the most authentic types of veg biryani to devour,!

It is well said that nobody does biryani as the Hyderabadis’ do. The Land of the Nizam’s adorned the foodies’ paradise with the most tasteful and mouthwatering Hyderabadi biryani. The marinated pieces of veggies, the flavorsome spices, saffron strands soaked in rose water when layered together in a dough-lined vessel, is most heartily hailed Hyderabadi vegetable dum biryani anywhere. And you know what multiplies the joy? That this delicacy Hyderabadi veg biryani is no more restricted to the realms of Hyderabad. Pick up your phone and explore Hyderabadi veg biryani near me to delve into some heavenly meal right away.

One place that draws attention right after Hyderabad when talking about vegetable biryani is Lucknow. The princely state of Lucknow is house to the celebrated and tender Lucknowi veg biryani, also renowned as the Awadhi Biryani. What is notable about it is its softness, light aroma, and minimal spices making it the first choice for one-pot meals for all. Lucknowi biryani.

The land of Kolkata brings together the culinary best of both worlds – the Rasgulla and the Kolkata veg biryani! The fetish of Bengal for rice is known to all. This rice mixed with the local spices, freshly picked vegetables brings out the most authentic local taste in the veg dum biryani. Indulge in some lip-smacking Kolkata biryani at a mere click of a button now.

Dindigul veg biryani is the newest entrant in the world of the most sought after biryanis around. Very few people are aware of the classic, juicy, and strongly flavored Dindigul biryani and the magic it casts on the taste buds.

Biryani is food for the soul. A fresh load of vegetables when marinated delicately absorb the finest taste, when blended with rich aromatic spices, infused in rose water, and poured on soft rice burst a splash of flavors in that bowl of veg biryani. That’s not all, be it a good day or a long one, scout for the best veg biryani near me to uplift your spirits. With veg biryani delivery options available, you can enjoy a hot-pot now at just a click. Just explore veg biryani online and you would be amazed to see the affordable veg biryani price options available. You can now grab the most authentic taste of Egg Biryani and Mutton Biryani too at pocket-friendly prices. Order from Ekdum to make your happiness warmer!